DONE, DONE and DONE. We finally finished the parking space off the alley. Can I hear an AMEN!! 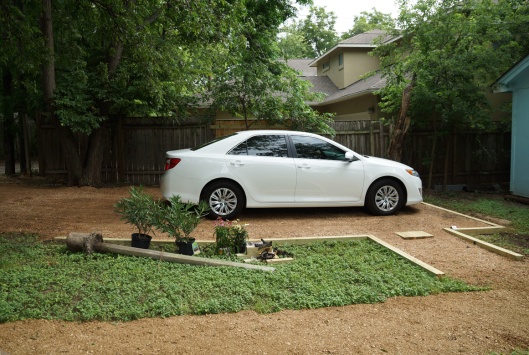 Took us a little longer than I thought. Two weeks. Would have been about 1 had I realized the parking space needed some retaining timbers — and DRAINAGE. DUH!

We SURVIVED …however, I might add during this project we sustained the following: a spider bite on the foot that caused major swelling (George); and a pretty big scratch from rebar at Home Depot (me). Oh, must mention going through four cans of OFF bug repellent.

This is what the backyard looked like in 2008, the year we bought the house. We removed that lil shack for the blue man cave/studio. And now the new parking spot replaces the space behind the blue studio that wasn’t so appealing.

More to come on the parking spot project…

And please, let me know if you do.

If I had to do it again I’d lay down the retaining timbers first. That just makes too much sense…lol!!

Next up is a little landscaping around the spot…just a few oleanders and coneflower.

a DIY work in progress

An Adventure in Restoration

Renovating an old house by a musical couple who want to live there the rest of their lives.

Patrons of the Pit

This Bud is for YOU

Bijouxs | Little Jewels from the Kitchen